The evolution of the SI 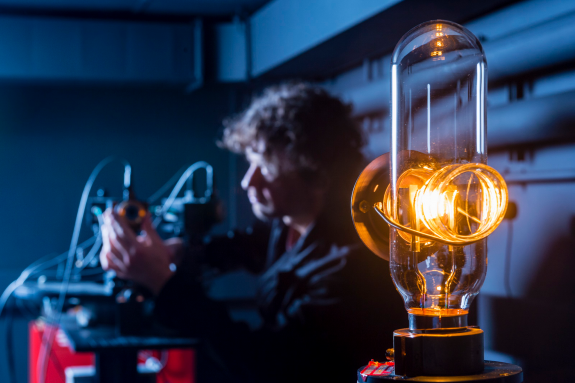 Since its adoption by the CGPM in 1960, the SI has been revised several times. However, the 2018 revision is exceptional in that it formally amends all unit definitions at once, revising four of them in a fundamental way. The scope of this revision is such that it has required numerous international collaborations between numerous metrologists and scientists in the most diverse fields of science.

The 2018 revision constitutes a major evolution of the international system of units (SI), while of course preserving all the units of measurement: the same 7 basic units associated with the same 7 basic quantities; the derived units and the prefixes already listed are not modified.

However, this is a significant and fundamental evolution for scientists: the foundation on which all these units are built has been shaken. In an industrial and medical context where measurements require greater requirements (level of uncertainty, cross-referencing of data of different quantities, increasingly efficient technological means, etc.), it seems essential to make the SI even more coherent than it already is. Three major reasons can easily be given to support this argument: the variation observed over a century in the numerical value of the standard kilogram (international prototype of the kilogram - IPK); the impossibility of realizing in practice the definition of the ampere; the independence of the definitions for most of them.

The basic principle of the revision of the SI is to base it not on the units themselves as it previously was, but on 7 constants of physics: this is the paradigm shift of 2018. These constants, which will therefore be called SI definition constants, are based on physical phenomena of a fundamental, universal nature (such as h, the Planck constant) or are derived from specific properties (such as the luminous efficacy of the eye). Relying on a "fixed" data base to build the new system is therefore the guarantee of working with coherent measures whose limits can be more easily pushed back (in theory).

The values of these constants have, for four of them (Planck, Boltzmann, Avogadro, elementary charge), required a long-term work on an international scale. Metrology requires redundancy to validate such changes. Numerous experiments have been set up in order to fix the numerical values, accepted by the international community. The convergence of the results (ensured by several conditions previously defined at the launch of these studies by the Consultative Committee of the Units under the authority of the BIPM), led in July 2017 to a set of numerical values endorsed by CODATA and summarized below.

The definitions of the SI base units, submitted to the vote at the 26th CGPM in November 2018, are summarised below. The values of each of the seven constants for the definition of the SI are specified in the texts of the definitions below. If adopted, they will apply from 20 May 2019.

SI base unit : second
Symbol : s
Quantity : time
Definition : The second is the SI unit of time. It is defined by taking the fixed numerical value of the caesium frequency ΔνCs, the unperturbed ground-state hyperfine transition frequency of the caesium 133 atom, to be 9 192 631 770 when expressed in the unit Hz, which is equal to s−1.

SI base unit : metre
Symbol : m
Quantity : length
Definition : The metre is the SI unit of length. It is defined by taking the fixed numerical value of the speed of light in vacuum c to be 299 792 458 when expressed in the unit m·s−1, where the second is defined in terms of the caesium frequency ΔνCs.

Base SI unit : ampere
Symbol : A
Quantity : electric current
Definition : The ampere is the SI unit of electric current. It is defined by taking the fixed numerical value of the elementary charge e to be 1.602 176 634 × 10−19 when expressed in the unit C, which is equal to A·s, where the second is defined in terms of ΔνCs.

Base SI unit : kilogramme
Symbol : kg
Quantity : mass
Definition : The kilogram is the SI unit of mass. It is defined by taking the fixed numerical value of the Planck constant h to be 6.626 070 15 ×10−34 when expressed in the unit J·s, which is equal to kg·m2·s−1, where the metre and the second are defined in terms of c and ΔνCs.

SI base unit : kelvin
Symbol : K
Quantity : temperature
Definition : The kelvin is the SI unit of thermodynamic temperature. It is defined by taking the fixed numerical value of the Boltzmann constant k to be 1.380 649 × 10−23 when expressed in the unit J·K−1, which is equal to kg·m2·s−2·K−1, where the kilogram, metre and second are defined in terms of h, c and ΔνCs.

SI base unit : candela
Symbol : cd
Quantity : luminous intensity
Definition : The candela is the SI unit of luminous intensity in a given direction. It is defined by taking the fixed numerical value of the luminous efficacy of monochromatic radiation of frequency 540 × 1012 Hz, Kcd, to be 683 when expressed in the unit lm·W−1, which is equal to cd·sr·W−1, or cd·sr·kg−1·m−2·s3, where the kilogram, metre and second are defined in terms of h, c and ΔνCs.

SI base unit : mole
Symbol : mol
Quantity : amount of substance
Definition : The mole is the SI unit of amount of substance. One mole contains exactly 6.022 140 76 × 1023 elementary entities. This number is the fixed numerical value of the Avogadro constant, NA, when expressed in the unit mol-1 and is called the Avogadro number.

At the 21st General Conference on Weights and Measures in 1999, the following recommendation was endorsed by the member states: "... that national laboratories continue their efforts to refine experiments which link the unit of mass to fundamental or atomic constants and which could, in the future, serve as a basis for a new definition of the kilogram...".

Several national metrology institutes have thus directed their efforts towards improving the uncertainty of the value of fundamental constants and launched experiments for the realization of units, in particular for units relating to mass, electricity, temperature and amount of substance.

The French metrology network therefore started several research projects in the years following this recommendation, enabling France to be at the forefront of this new redefinition of the IS. Our national work has therefore focused on the following areas.

The kilogram and the Planck constant, h.

The Kibble balance (formerly called the "watt balance") is an instrumentation that makes it possible to compare, in two configurations (called static and dynamic) two types of energy : one electrical, of which the elementary quantification is the Planck constant ; the other mechanical, of a potential nature and related to the mass of the object being compared.

The French teams therefore embarked in 2002 on a large-scale project to design and produce this instrumentation, involving researchers from Cnam, LNE and Paris Observatory. Each team brings its expertise in the main scientific fields of the experiment: mass, electricity and magnetism and gravimetry. The objective was initially (for the July 2017 deadline) to contribute to the international determination of the value of h with a target uncertainty of 8 x 10-8. Four h values were successively published by France between 2014 and 2017. The laboratory is now one of the international laboratories (with NRC - Canada, NIST - United States) that have contributed to the current determination of this fundamental constant, through Kibble's balance experiment. The current objective is to carry out the chain of dissemination of the kilogram in France, in accordance with the missions of our national laboratories. Work has already been carried out within the framework of the European NewKilo project to evaluate the use of several materials as potential transfer standards. More specifically, the studies focused on the surface physico-chemistry of artefacts of different compositions. Iridium seems to be a good candidate because it has low magnetic susceptibility (≃ +3.7 x 10-5) and high hardness (≃ 450 Hv).

The kelvin, through the determination of the Boltzmann constant, k :

Traceability to the ampere:

Until the revision of its definition in 2018, the stricto-sensus realization of the ampere was not made, its definition making it impracticable (infinite conductors, negligible sections, in vacuum,...). The realization could be done via farad, ohm and volt. The discoveries of the quantum Hall effect and the Josephson effect, respectively for resistance and voltage measurements, have revolutionized electrical metrology. Electrical standards have been implemented for many years using these quantum devices, and already based on the fundamental constants : e and h. However, the universality of these phenomena had to be proven. To make the system coherent, the LNE teams worked on this new definition by studying the direct determination of the von Klitzing constant (RK) by producing a new Thompson-Lampard calculable standard with five electrodes. These developments have demonstrated the feasibility of the operation. The development of this instrumentation continues today within the framework of the implementation of a powerful impedance comparison chain: this set will allow a direct determination of the farad, then of the ohm in SI units.

Furthermore, the new definition of ampere can be put into practice using a quantum current standard. The French teams are currently continuing their development of an electrical quantum current source (between 10 pA and 100 pA) with an accuracy of the order of 10-7 in relative value. This was also the objective of the European EMRP Qu-Ampere project, completed in April 2015 and to which LNE contributed by studying new electron pumps and developing a new cryogenic current comparator (CCC).

International authorities are already considering future improvements to the SI definitions, in particular for the candela and the second. Today, the second is defined from atomic clocks with cesium atoms that operate at microwave frequencies (around 9 GHz). Scientific research has shown that the higher the frequency, the lower the measurement uncertainty on the frequency. The next step, for the realization of the unit of time, is the improvement of accuracy by very promising developments of clocks, this time in the optical frequency range (a few hundred THz), clocks with neutral atoms or ions. France, for its part, is developing two types of clocks with Sr and Hg neutral atoms. Such experiments should improve the definition of the second by more than an order of magnitude.